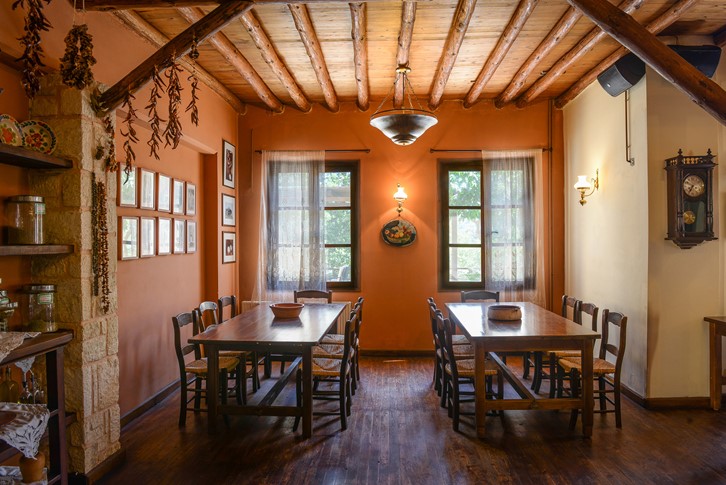 Traditional Cuisine at the Restaurant of Enagron

The Cretan dietary standard and its relation to the good health and longevity of the Cretans became known through the “Seven Countries Study”. The study was first conducted by the French SERGE RENAUD  and  MICHEL DE LOGERIL and was later continued by the American doctor ΑNCEL KEYS. The latter proved that the Cretan Dietary Standard, given to patients that had suffered an acute myocardial infarction, reduced the percentage of death 3 years after the infarction by 70% in comparison to those patients that were given the diet of the American Heart Association.

What are the basic elements of the Cretan cuisine?

The process of raw materials and the gentle cooking techniques mainly in a baking pan and in low heat.

Many elements of the Cretan diet originate in ancient times-the Minoan Era- where even then the basic elements were olive-oil, leguminous vegetables, vegetables, cereals and wine, as scientific researches have concluded.

The Cretan cuisine, as is inherited from generation to generation, is characterized by  simplicity and it is based on products of good quality that are mixed with imagination, the latter sometimes born by the need to survive. It is quite tasty and scientifically proven to be very healthy.

The ways of preparation and cooking are those that keep the basic products as they are, bring out the flavour and are health-friendly.
At Enagron, we stay true to the basic elements  of the Cretan traditional cuisine:

Raw Materials: selected fresh products of the Cretan land, pure, grown under gentle methods without chemicals and additives, many of which we produce in our farm. The basis of the food is solely the PURE VIRGIN oil.

Techniques: We follow the ways of processing and preparation of the delicacies, those taught from generation to generation, from our mothers and grandmothers, those that are taught from mother to daughter, because in Crete, the traditional cuisine is a female matter.

Cooks: Women from the villages of the area, who since they were young occupy themselves with cooking and the diet of their families, having as a helping hand only the rules of food management and hygiene.

Stavroula, Irene and Virginia are our cooks.

The restaurant of Enagron is open daily for lunch and dinner not only to those that reside with us, but to all that wish to have a meal, to all those that wish to taste and enjoy the Cretan cuisine, under the shade of oaks, in a unique environment, in nature, overseeing the canyon, sensing the essences of nature and hearing the birds' songs during the summer months, or the sensual area of the restaurant next to the fire place in the winter.

You may also watch the preparation procedure and be taught recipes during cooking lessons organised on a weekly basis.